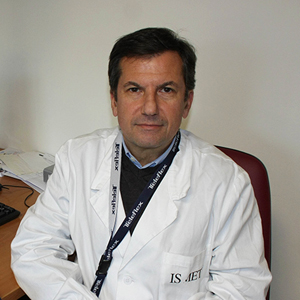 Salvatore Piazza began his collaboration with ISMETT in 2005 as a consultant. In November 2016, he became Director of the institute’s Kidney Transplant Program. Over the past 5 years, he has performed over 250 kidney transplants. Previously, he was the director of the transplant surgery operational units of ARNAS Civico Hospital, where since 1996 he had been part of the kidney transplant and organ procurement group.  Since 2000, after a period at the Urology Department of the Campus Biomedico in Rome, he has increase his knowledge of the surgical treatment of urinary system cancer, performing a significant number of operations, including cystectomies with neobladder, anterior pelvectomies in women, and radical prostatectomies.

In 2002, he was appointed director of the Extracorporeal Lithotripsy Unit. Under his leadership about 400 treatments per year were performed.

He graduated in Medicine and Surgery from the University of Palermo in 1988, and then specialized in urology. Since 2006, he is authorized to perform kidney transplantation.